LADY DRURY'S CLOSET or THE HAWSTEAD PANELS by Adèle Geras

On a beautiful day last November, I visited the Christchurch Mansion in Ipswich with my friends Ewa and Bob. The house is set in a lovely park and contains much treasure and art that belonged to Cardinal Thomas Wolsey.  So far, so pleasant and though fascinating, par for the 'looking round an interesting historical house' course. Then, just before we left, we stepped into one of the strangest rooms I've ever seen. I took the photos that follow, but bought a guide to the Closet  on the way out of the museum and I am using the facts contained within it and would like to acknowledge the expertise and work of Mary Halliwell, its editor and all the contributors to the publication.  They go into much more detail about the paintings and anyone who'd like to find out more about them is advised to apply to Friends of Ipswich Museums.

My first impression of the room, as I stepped into it was of being in an enclosed space, about two and half metres square, whose every wall was covered with pictures. Many, many paintings, each one of which was not very big but which together added up to a stretch of rectangles which depicted a very strange world indeed. Almost all the paintings are derived from emblematic books, which, after the Scriptures, were the most popular books in the 17th century to which people turned for visual representations of spiritual and mental well-being and how to attain them. 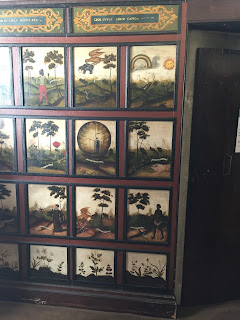 Lady Anne Drury lived in Hawstead Place near Bury St Edmunds, and she was the wife of Sir Robert Drury and sister of Nathanial Bacon,  a talented painter. It's thought that she herself painted these pictures and I like to believe that. Her husband was often away at court or on foreign campaigns and she turned to religion for comfort while she was living in Suffolk. She was a Puritan and greatly influenced in meditation and prayer by Joseph Hall, her chaplain and spiritual director at Hawstead. Images of God and the Saints were not part of her devotions. 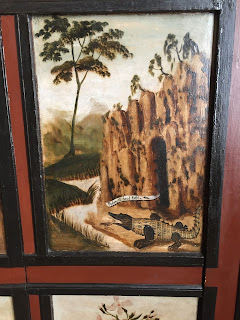 Then, in 1610, her daughter, Elizabeth died. She was fifteen years old and Lady Drury was now childless. John Donne wrote an Elegy for her called 'An Anatomy of the World, wherein, by the occasion of the untimely death of Mistris Elizabeth Drury, the frailty and decay of the whole world is represented.' 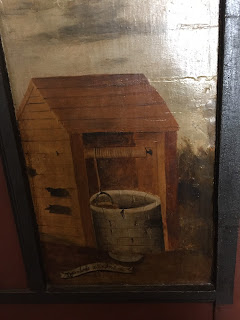 It was printed first in 1611 and here are the two final lines:
'She, she is dead; she's dead. When thou knowest this,
Thou knows how lame a cripple this world is.' 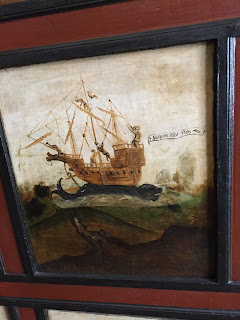 In 1612, Donne printed another version of the poem, called 'The Second Anniversarie. Of the Progress of the soul'  and this version contains the lines:
'She, she is gone; she is gone; when thou knowest this,
What fragmentary rubbish this world is
Thou knows, and that it is not worth a thought.'

It's an interesting change. This, bynthe away was John Donne's first published verse. To me, the room displays 'the fragmentary nature of the world' as well as the wonders to be encountered there. We see flowers, landscapes, figures, animals: all manner of things, some beautiful, some grotesque, like the very disturbing mermaid below. The whole universe is before our eyes. There are images of flight and creatures from nightmares. Crocodiles and sheep. Mountains. The image of the well, above, seems almost surrealistic to a modern eye. 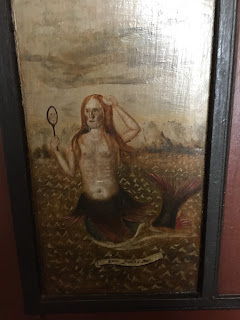 I imagine Lady Anne going every day to paint. Thinking: what shall I look at next in order not to see the pain in my heart? What shall I focus on so that I don't have to focus on my loss? Finding peculiar  items in the emblematic books and making pictures of them and arranging them to fill an endlessly empty horizon.

If you have the chance to visit the real thing, please do. You will be haunted by this room as have been since I saw it. I will return.

How moving and sad and true. The paintings are rather the opposite of the Donne, aren't they, but I suppose you can't dismiss the world as fragmentary rubbish if you're a Christian. I hope the painting of them helped reconcile her to the will of her God, poor woman.

How wonderful and how sad. Thankyou Adele!