WORDS - AS WELL AS DEEDS by Sheena Wilkinson

In December 1913, the Irish suffragette, Republican and socialist activist, Hanna Sheehy Skeffington, wrote to Lady Ishbel Aberdeen, the writer and philanthropist, thanking her for the ‘great act of kindness’ in providing Christmas dinners to prisoners and suggesting that she might do so again.  Having recently been imprisoned herself, Mrs Sheehy Skeffington appreciated ‘what such a treat must have meant…something that drew Christmas Day nearer…’

One of the joys of Christmas is receiving hand-written cards. I have two old friends with whom I exchange ‘real’ handwritten letters during the year, never having grown out of the habit established in student days, but by and large, the art of the handwritten letter is dying out. That this is a matter of regret to many was suggested by the recent BBC Radio 4 programme Pen Pals, in which people wrote to strangers abroad. The resulting letters were appreciated for their tangible nature, the pleasure of something personal arriving by post, as much as for their content.

Reading Hanna Sheehy Skeffington’s letter to Lady Aberdeen, I wondered what it might have looked like as a physical entity, whether it was typed or handwritten, how long it took it to travel from Dublin to Scotland, how Lady Aberdeen received it. It is a letter of request, but also of thanks.

Sometimes it’s too late to thank people. I’m reviewing the collected political writings of Hanna Sheehy Skeffington for the Dublin Review of Books, and so many times, putting a post-it note beside some little fact or witticism, I’ve thought how grateful I am to radical, brave women like her, and what a pity she’ll never know. It’s the same gratitude which inspired my novel Star By Star which focuses on the 1918 General Election when women in Britain and Ireland voted for the first time.

Though one of the suffragette’s slogans was Deeds Not Words, words are important. This year, I’m going to take time every month to thank a woman who deserves it. I’ll remember women from history, women today, and even fictional women – who doesn’t feel gratitude to Jo March? My lovely publishers Little Island have produced these beautiful postcards, with space on the back for a message ‘for a woman who inspires you’.  On the 14th of each month they’ll print my postcard on their blog at www.littleisland.ie. The last postcard will be printed on 14th December 2018, the centenary of the 1918 election.

You can join in! The postcards will be distributed to selected bookshops, and I’ll be giving them out at school visits. Or if you ask the good people at Little Island very nicely, they might send you one… as long as you promise to send it on with a message, and take a picture to share with us. Or of course, you can use your own postcard. All you need are the words, and a woman to thank.

There’ll be more information about the project on the Little Island blog on 14th January, so do call in and have a look. I can't wait to share my twelve thank you messages, and I can't wait to read yours. 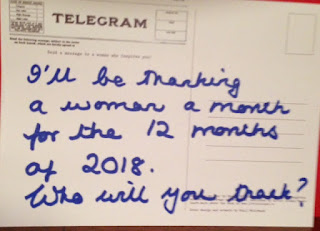 This sounds like a great project! I love it!! So many amazing women in the world and in film and literature!