'Please let me pass!' by KarenMaitland

Country roads in Devon are hazardous at the best of time, but in freezing January, they can be lethal. Devon has 8,000 miles of roads, more than any other county, and many are twisting, single-track lanes, enclosed by high hedges on either side and pitted with deep potholes. You can always spot the car whose owner lives in Devon by the 'hedge rash', the numerous scratch marks on the near-side. When two vehicles try to pass each other they either have to ‘hedge hug’, squeezing passed each other, shaving the paint from the side of the car as it's dragged along a thorn hedge, or one car will have to back up or down the hill and round the twisting bends until they find a passing place. There is an unwritten local code governing who should politely give way. The pushy people who try to force someone else to back up, are contemptuously referred to as 'blow-ins' or 'emmets' (ants), better known as tourists, whether they are or not!


Of course, these lanes were in use centuries before the invention of cars, caravans and tractors. So perhaps the solution is to encourage tourists to read the highway code section of an ancient medieval book called The Sachsenspiegel which became the law book of the Holy Roman Empire. It was written around 1220, but parts of it were still in use until 1900. A learned administrator, Eike von Repgow, complied a book at the behest of his liege, Count Hoyer of Falkenstein, drawing together the Saxon laws of custom and practise. He translated the work from the Latin into Middle Low German. The Sachsenspiegel covers laws governing many aspects of life, but some of the most fascinating rules concern roads and travellers. 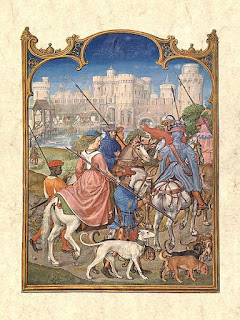 One states that the king’s highway must be wide enough to enable one cart to give way to another, in other words about 13 foot. There was a strict rule in the order of precedence. Someone on foot must give way to a rider, a rider must give way to a cart and an empty cart must give way to a laden one. But if carter should find himself behind a pedestrian or rider approaching a narrow bridge, then he must draw the cart aside allow them to cross the bridge first in case the cart becomes wedged.

If two carts are approaching on either side of the bridge, then whichever cart gets onto the bridge first must be allowed to cross first, regardless of whether it is full or empty. The same principle underlies a familiar proverb which also comes from this book, 'Wer zuerst kommit, mahlt zuerist.' It literally means ‘He who comes first, grinds first,’ which was a law governing people who were bringing their grain to the mill. Chaucer was obviously familiar with this, as he uses it in the ‘Wife of Bath Prologue’ – 'Whoso that first to mille comth, first grynt.' Or as we now say – 'First come, first served.'

The Sachsenspiegel states that any traveller could cross uncultivated land provided it wasn’t enclosed, but could be fined heavily for straying across cultivated fields. If you were in a cart you were fined a penny a wheel, or if riding then a halfpenny. You could also be obliged to compensate the farmer for the value of any of the crops you had destroyed. These were on-the-spot fines and anyone refusing to pay could be lawfully seized and held until fine of 3 shillings was paid, which was roughly the cost of a sheep.

Any traveller stealing hay or corn from a field at night and carrying it off, faced the death penalty, but it was permitted that if a traveller’s horse was on the verge of collapse, the traveller could feed it by cutting as much corn or fodder as he could reach while standing with one foot on the road. But it had to be eaten by the horse on the spot.

Travel was extremely hazardous, not only did you have to contend with the weather and the risk of accidents, but there were unfriendly animals too. Many travellers put the herb known as hound’s tongue inside their shoes which had such a foul smell that it was supposed to drive away unfriendly dogs.

But in case that didn’t work, the law said that any traveller who was attacked by a dog, pig or bull, was entitled to defend themselves, even to the point of killing it, without having to pay the owner compensation, provided he swore on a holy relic that he’d had no other choice. But anyone who owned an aggressive dog or a pet wolf, bear, stag or ape, must pay for any damage these animals did. It is interesting that in the 13th century there were enough people who kept these animals as pets or for use in entertainments at fairs, that it was necessary to specifically name these ‘tamed’ animals in law.


If you survived the vicious farm dogs and wandering livestock, one major hazard still remained – outlaws and robbers. They knew that most travellers, especially those on horseback or in carts, were bound to be carrying at least enough money for a few night’s lodgings and probably a great deal more, in addition to goods, valuable horses and carts which were a great temptation to any thief. The significance of choosing to travel on the king’s highway or waterways was that, in theory, you were under the protection of the king at all hours of the day and night. Specifically mentioned in the Sachsenspiegel was the protection it afforded to women, Jews and priests.

Anyone found guilty of murdering, assaulting or robbing a traveller on king’s highway was liable to be executed by beheading or being broken on the wheel depending on their crime. Severe though this punishment was, it probably didn’t do that much deter crime, since you first had to catch those responsible and on a lonely stretch of forest road, it might be hours if not days before a victim would be found.

But there was also a class of beggars or confidence tricksters who flourished both in Europe and England. They specialised in stripping themselves naked, smearing themselves with dirt and animal blood and wandering into towns or villages tearfully claiming they had been robbed on the road. Monasteries, churches or kind-hearted townsfolk would often take pity on them providing them with shelter and food, and also fresh clothing which they could carry off and sell in the next town. They might even receive a little money to compensate them for their loss, especially if they claimed the supposed robbery had taken place within the village bounds, which the inhabitants were supposed to protect. I suppose the modern equivalent would be those fraudsters who make false insurance claims.

The type of traffic on our roads may have changed, but human nature doesn’t.