The Woman Who Created Corpses: Mademoiselle Bihéron and her Anatomical Dolls – By Anna Mazzola 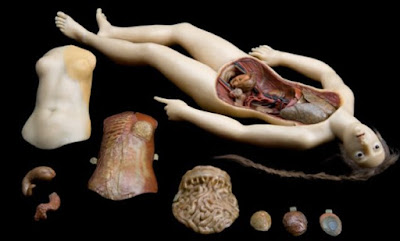 Medical students in the 18th century faced a big problem: not enough dead bodies on which to experiment. The solution? Wax anatomical models. Made from a mixture of wax from bees and other insects, the models were a clever and less stinky alternative to cadavers, often with take-out parts and cut-away sections to highlight particular systems of the body.

The centre for wax model making was Florence and model-makers were generally male. However, in the mid 1700s Marie Marguerite Bihéron rose to fame in Paris as a self-trained anatomist who exhibited her collection of wax anatomical models as a cabinet of curiosities in her house near the Sorbonne.

From drawing to dissection

Little is known about Bihéron’s background, or why she developed such a fascination with anatomy.  She was born in 1719, the daughter of an apothecary. She studied illustration at the Jardin du Roi with Madeleine Basseporte, who taught her the art of anatomical drawing. 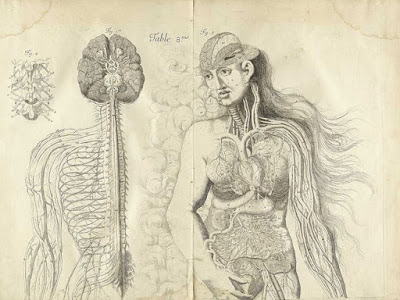 However, it was quite a leap from anatomical drawing to anatomical modelling, which was altogether a more ‘hands-on’ experience. Bihéron would have had to obtain corpses from hospitals and graveyards, then take casts of dissected specimens in order to produce wax copies. She would then have painted on structures such as membranes, or imitated them using thread. Each model would have taken months to complete.

The result was life-size anatomical models including a detailed model of a pregnant woman, complete with moveable parts and foetuses, which she demonstrated to the Académie Royale des Sciences.

Bihéron was widely praised for the anatomical accuracy and lifelikeness of models. Jakob Jonas Björnståhl wrote to Carl Linnaeus that:

‘Marie Catherine Biheron makes models of parts of the body that are absolutely lifelike. And they do not break. She does not reveal what material they are made of, although it seems as if they were made of wax mixed with something.’

Her display of anatomical models attracted a significant audience including surgeons, academicians, scientists and artists. In the early 1770s, she travelled to London where she exhibited her models in a room on the Strand.

She was also employed as a teacher of anatomy. The French writer and philosopher Denis Diderot sent his daughter to Mlle Biheron for a sex education lesson before her marriage.

His brother, a priest, was appalled.

Ha-sex education and the priest was appalled! Fascinating bit of history this
I speculate on the constricted relationships of men and women then.

Read this about this post elsewhere and now visiting HG properly.

Pleased to find the delicate female figure was modelled on Venus, which I'd wondered about at first glance after seeing the body's stance.