In screenwriting classes they often urge authors to give their hero the most powerful opponent possible.

So when it came time for me to write a long-planned spinoff to my Roman Mysteries books I looked at my timeline in the late first century AD and realised I had the perfect opponent, a fascinating tyrant who was the most powerful man in the world at that time: the Emperor Domitian.

Domitian was the eleventh emperor if you start counting from Augustus. He was the third Flavian and ruled for fifteen years, longer than his father Vespasian or his brother Titus. By all accounts he was a corrupt monster. Recently some scholars have tried to argue that his reputation was the result of a smear campaign by a few disgruntled senators. 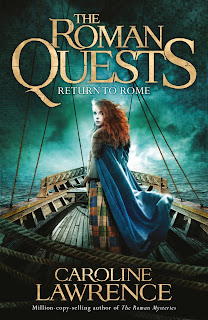 For the first three books in my Roman Quests series, he is the unseen opponent sending soldiers, guards and torturers to pursue my protagonists. In the final book, Return to Rome, we finally meet him and witness his assassination. Of course I am writing for children so some of the action happens offstage and other events are seen through the eyes of my young protagonists.

When you write about someone you can’t help but empathise. I feel Domitian was probably somewhere on the spectrum and socially dysfunctional. As one of my characters says near the end of Return to Rome, ‘If Domitian had been merely a butcher or a sailor he only would have made life miserable for his small circle of family and slaves. A man like that should not be given the power to rule an empire.’ 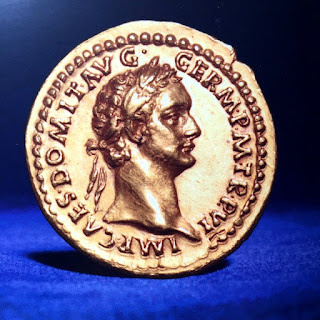 Domitian’s assassination in AD 96 was documented in gory detail by Suetonius Tranquillus, the great biographer of the Caesars who was about 27 years old at the time of Domitian’s death. You can read a vivid account in all its gruesome detail here. Other ancient authors who write bitterly about the eleventh emperor include Aelius Aristides, Dio Chrysostom, Dio Cassius, Eusebius, Martial, Pliny the Younger, Statius and Tacitus.

Here are fifty bizarre claims about Domitian  – all made by ancient sources – that make him an irresistible opponent in a historical novel set at the end of the first century.

He was born on 24 Oct AD 51 in a house on Pomegranate Street in Rome.
This is one of the few ancient addresses that has come down to us.
He later turned the house into a temple dedicated to the Flavians, his family.
He grew up in poverty, although his father Vespasian later became emperor.
Once, before his father became emperor, he was forced to flee for his life.
He survived by dressing like a woman and hiding in the house of a friend.
He always plotted against his older brother Titus, who succeeded their father.
He was a skilled archer and often fired arrows through slaves’ spread fingers.
He often amused himself by spearing heat-drugged flies with a stylus.
A steward once quipped that nobody was with him, ‘not even a fly’.
He became emperor in AD 81 after the mysterious death of his brother Titus.
An officer named Saturninus conspired against him in late 80s.
Domitian’s resultant paranoia led to a ‘reign of terror’ in the AD 90s.
He covered some walls with reflective stone so that nobody could sneak up on him.
He put the freedman who assisted Nero’s suicide to death.
Unlike Nero, he did not avert his eyes from torture.
He liked to watch people and terrify them with his gaze
He often pretended to befriend people just before he executed them.
He encouraged slaves to denounce their rich masters as traitors
He then confiscated the property and split the proceeds with the delator.
He accused a pantomime actor named Paris of having an affair with his wife.
He spared his wife Domitia but murdered Paris in the middle of a street.
He executed people caught leaving flowers at spot where Paris had died.
He was a notorious womaniser and called his lustful activity ‘bed wrestling’.
He seduced his niece Julia, daughter of his brother Titus, and got her pregnant.
He caused Julia’s death by demanding she have an abortion that went wrong.
He terrified guests by inviting them to death-themed dinner parties
The dinner parties were held in pitch-black rooms draped in black cloth.
Guests’ name-tags resembled grave slabs and were lit by grave lamps.
He gave them food commonly served at banquets for the dead.
Guest were served by naked boys painted black to resemble ghosts
He liked to watch female gladiators and pygmies battle in the arena.
He collected freaks and was especially fond of a boy with a tiny head.
Late in his reign, he demanded to be addressed as ‘master and god’.
He erected a gigantic bronze equestrian statue of himself in Caesar’s forum
He changed the name of his birth-month October to Domitianus.
(This change of month name did not catch on.)
He added gold and purple to the chariot factions of red, white, green and blue.
(The new chariot factions did not catch on.)
He put a high podium in his palaces to lift himself above others.
He was obsessed with his hair loss and wore an expensive wig.
He wrote a book about curing baldness.
He revered Minerva above all other gods and considered her his protector.
Shortly before his assassination he dreamt that Minerva abandoned him.
From an early age he knew the exact day and hour of his foretold assassination.
He had several astrologers put to death in order to stop their prophecies.
On the fated day lying slaves told him the deadly hour had passed and he relaxed.
After the first assassin stabbed him, several others piled in, too.
His wife was out of town but reputedly knew of the planned assassination.
Rome’s initial reaction to his death was fairly low-key.
The Senate proclaimed Nerva emperor with suspicious rapidity.
The Senate also decreed that his name and image be destroyed.
Domitian’s body was removed and cremated by his childhood nurse Phyllis.
She mixed his ashes with those of his niece Julia, whose death he had caused.


These are only a few fascinating claims about the life and death of Domitian. You can read lots more of them along with a fictionalised account of his assassination in my fourth and final Roman Quests book, Return to Rome. He also appears in my Roman Mysteries, especially final book in the series, The Man from Pomegranate Street.

Posted by Caroline Lawrence at 01:02

He didn't go down without a fight, did he?

I used to have a little coin with Domitian's likeness that I wore on a chain for about then years. My sort of anti-hero. Whatever happened to that? Fantastic cover for your quest book!