A VICTORIAN VIEW OF THE MAN IN THE MOON 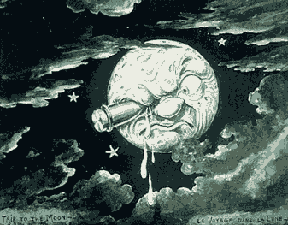 A still from Le Voyage dans la Lune directed by George Melies
In 1865 Jules Verne wrote his novel From the Earth to the Moon in which a rocket was fired from America - Florida to be precise - and after safely reaching its destination the craft then returned to Earth, splashing down into the Pacific Ocean. (There's something very familiar - something rather 1960's about that, don't you think?) 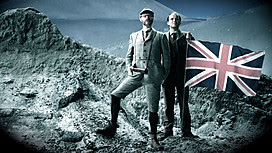 In 1901 H G Wells wrote The First Men in the Moon, a romantic science fiction tale in which, by the means of an anti-gravity shield, two men are propelled to the Moon, meeting its inhabitants and having quite a thrilling time. A film was made in 1964, and another in 2010 which stars Mark Gatiss and Rory Kinnear.

But back in 1902, over a century before and based on the novels by Verne and Wells, Georges Melies wrote and directed Le Voyage dans La Lune or A Trip to the Moon - the very first science fiction film that I happen to know about. (Admittedly, this was a year after Queen Victoria's death and therefore not strictly Victorian, but I think it's fair enough to say that the conception and preparation would have been well under way before the actual release date.)
Although the camera view is somewhat static and rather long with none of the character 'close-ups' exhibited in later cinema drama - indeed when watching this short film the viewer might almost be in a theatre observing some intricate pantomime - when considering the date of its genesis I think it is something extraordinary, especially from about 4 minutes in when the rocket first plunges into the Moon...with some charming animation and, in this particular version, an equally charming voice-over and musical interpretation by the Vancouver folk band Maria in the Shower.
Posted by Essie Fox at 00:30

Thank you for posting about this film - it's wonderful (after the slow start). I put it into Slightly Jones' Notebook and kids seem to love it too!

Nice post & clip. I believe the wonderful "Hugo" film also refers to Melies silent films. (Believe as in "saw DVD among the tumult of a family visit so can't be totally sure".)

Maybe the Hugo book does too? Such fantastic Victorian imaginations!

I still haven't seen Hugo...thank you for the reminder.

Lovely post! I haven't watched the film yet, but the sight of the rocket embedded in the moon's 'eye' does make me wince...

Yes, it is indeed what Hugo is about. It's a lovely portrayal of it all.

The film is definitely interesting! Voyages to the moon seem to be a popular theme in proto and other early science fiction; I think the tradition begins with the Greek Lucian and came back during the early 19th century with E.A. Poe and others.

Thank you for your comments.Hugo is ordered - book and film!